This Planet is a Tedious Place...

I've finally got round to implementing a stylesheet switcher - just take the pill in the top right hand corner. As usual, it only needs a simple (and tiny) bit of jquery, and stores your choice in a cookie.

I don't suppose anybody will really like the alternative colour scheme, but I quite fancied going orange as it's my favourite colour. Once you have children, it turns out you must choose a favourite colour and stick with it...

I think I've created the simplest and smallest lightbox script so far. [Edit: actually, it's not the smallest, but I still think it's the simplest].

OK, so I doubt the world wide web (or whatever it's called these days) needs another one, but it does just what I want and not a lot more. It uses jquery and works with proper browsers (Safari, Firefox, Chrome, etc.) and also IE6 onwards. I haven't tried it with IE5, but I'm not holding my breath.

Try clicking this image to see it in action: Get the source code here. For further details, have a look here...

I soon found out the problem with my solution to the google image search problem in my previous post. If you just disable javascript for google, you lose maps, etc. Unfortunately, Chromium's content preferences are slightly limited at the moment - you only seem to be able to disable javascript on a site by specfying a top level URL only. That means no limiting to image search results only.

So I decided to bite the bullet and write my first Chromium extension:
http://chrome.google.com/extensions/oogle

I can't be the only person who hates the new google image search.

Firstly, the new image results. OK, they look quite nice, but soon you realise that they've hidden the useful information like the image size and type. That's annoying, but I do quite like the way it loads the images as you scroll down the page.

But the big one for me is the annoying 'lightbox' when you choose an image to visit. Lightboxes are fine when you click on an image for a better look, but why do I need to see one when visiting the page? I've already seen the image out of context in the search results - I don't need to see it again. Why should I need to click the page again? Very irritating.

I'm sure somebody will create a Chromium extension to automatically use the old 'basic' search (which you can choose once you've done your search - but it doesn't seem to remember your choice), but in the meantime, a more brutal approach is to simply disable javascript for google.com (or google.co.uk in my case). It then defaults to the old frames based result view. Who would have thought that would have been preferable?

Check out this picture from the Vintage Computer Festival at Bletchley Park last weekend. That's Andy McCluskey and Paul Humphreys (Orchestral Manoeuvres in the Dark) listening to a version of one of their tracks I did on the BBC Micro nearly 20 years ago! 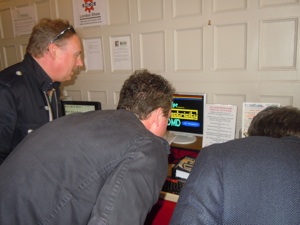 Thanks to Dave Moore for the photo.

OK, so I like a good conspiracy theory as much as the next man. Maybe I don't really see them everywhere, but I certainly don't buy the official line on a whole load of things.

9/11 doesn't add up to me. There are just so many things wrong with the official explanation for it to be true. Here is a link to the most balanced article I've read so far:

Jaws - from when Hooper, Quint and Brody head out to kill the shark onwards. Top quality Spielberg - brilliant stuff, and 35 years old!

Here's one that does a useful job:

And here's another useful one:

Some of my avid blog readers were a bit confused when adding comments - it's not obvious how to format urls, images, etc.

So - the first step was to add a live preview! It should at least show you what your comment will look like before you post it.

The next step will be to add some buttons to insert the codes for you - around any selection. For now though, the supported UBB codes are:

I haven't tried all of these, so feedback is welcome (Will).

Testing:All seems to be working to me.This is my rifle! There are many like it, but this one is mine! My rifle is my best friend. It is my life. I must master it, like I master my life. Without me, my rifle is useless. Without my rifle, I am useless. I must fire my rifle true! I must shoot straighter than my enemy who is trying to kill me. I must shoot him before he shoots me![code]int main(){ return 0

Two more points...i) All seemed to be formatted correctly in preview but not displaying correctly when posted.ii) Seemed to fail posting comment (just displayed preview again) but appears to have posted on the multiple times that I attempted it.

Another point.I'm sure I only hit add comment once the last time.

I thought I'd dig out my Virtual Boy a few days ago. I thought the kids might be interested to have a go on something a bit different to the Wii. Unfortunately, one of the displays had started playing up which spoilt the effect somewhat. A quick bit of research latter and it turns out that the trick is to take the display out, stick it in the oven for a couple of minutes, and then rub your finger on it for a bit. Book.

Except getting the thing open is a bit tricky. The security screws holding the unit together need something called a gamebit. I found one on ebay and got ready to go, but some of the screws are so deeply set that the gamebit wouldn't reach them! So I had to dremel the hex section to make it circular and cut a slot in the end for a screwdriver. Eventually the case was opened and the offending display was removed. Two minutes in the oven later, a bit of rubbing and we're back in business!

The kid's interest lasted about 30 seconds.

How on earth did they ever convince John Malkovich, Colm Meaney and Steve Buscemi to be in this film? Even John Cusak should have avoided it. Still, it's one of those films I can't help watching every time it's on - along with Starship Troopers...

Excuse me while I self-comment, but I just need to 'doh' myself - I was just going to try two posts on the same day, but I managed to post at exactly midnight! Oh well...

All those people out of their seats on the plane at the same time is just too much for me to take! As for Starship Troopers, that's just awesome because it has NPH in it!

I've been forcing myself to use Chromium recently - it seems much faster and less bloated than Firefox, but it still lacks some features that I really would rather not do without - namely, a vertical tab bar and icons only on the bookmarks bar. Most other things can be got round more or less, and I do love the way you can add and remove extensions on the fly.

So far I'm running with:

Vertical tabs are in development apparently...

So Blogger decided to stop supporting FTP publish blogs, leaving me a bit stuck. I had a play with Wordpress but it didn't seem to be very easy to customize, and doesn't support arbitrary scripts.

So I decided to roll my own in perl. It should publish a valid RSS feed (please accept my apologies for anyone who received multiple updates during development!) and supports comments with via logging in to a local account. I had a look at some code to implement OpenID, etc. but it all looked a bit too tricky...

Actually, maybe good riddance is a bit harsh - it was a free tool after all.

Blogger has gone backwards a long way in the last couple of years. I love WordPress - once you understand how themes work it's pretty easy to customize, but I agree that the lack of arbitrary scripting can be a pain. How long did your own engine take to construct and how secure is it?

Not very long to be honest - there's not much to it. Everything is stored in flat files (a bit like blogger), and the login system uses a simple database. Not sure how secure it is - it's probably not really an issue anyway with my meagre audience! My biggest worry is spam posting, but I've got a strategy for that...

We've been using Bugzilla at work for a while now and it does it's job reasonably well. It works even better as an SSB (created with Fluid).

However, it does have a couple of small niggles - for some reason the columns in the search results are truncated, and you can only click the defect number to visit the defect. Luckily both of these can be fixed easily with some Userscripts: Click Row and Expand Columns.

I quite like the idea of Safari's Top Sites feature - it just seems to make a bit more sense than a blank home page. As a Firefox user, I thought there would be an extension that provides the same functionality, and as expected there are a few, eg Fast Dial and Speed Dial. Crucially however, neither of them use your browsing history to provide the most relevant pages - you need to manually configure them, so in effect they are just bookmarks displayed as thumbnails.

There is a way to get what I wanted though - using Google Toolbar. Install it, go to the settings page, enable the 'Google New Tab page', and there you have it - a page of thumbnails based on your recent browsing history. Job done, except there is now a really ugly, bloated Google toolbar cluttering up the window. A quick trip to the toolbar menu to disable it, and we're back to normal. However, now the flippin' new tab page has stopped working!!?? Luckily there is another setting under the Layouts page - 'Keep features working with invisible toolbar'. Hmmm, snappy name....